The Shropshire Down breed was originally developed specifically to produce butchers’ lambs with good carcass conformation and excellent eating quality, a trait carried on to this day by Shropshire Sheep.

Modern Shropshires can be used for prime lamb production and also make excellent terminal sires, when crossed with commercial ewes. 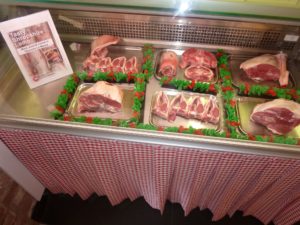 Carcass grading figures for a consignment of 22 lambs supplied in the Summer of 2005 to Lloyd Maunder in the South West, show the high quality of Shropshire lambs.

After slaughter, the lambs were weighed and then assessed “on the hook” by independent inspectors. Each lamb received a grade for carcase conformation and the level of fat cover. For carcass conformation, there are 5 grades (E, U, R, O and P) where “E” is the best and “P” is the poorest. For fat class, “1” is the leanest and “5” the fattest, with grades 3 and 4 being split into two categories: Light (L) and Heavy (H). Grades 3H up to 5 are generally considered too fat. Fat class 1 is generally considered too lean.

(The above Figures were kindly supplied by SSBA members, John and Pauline Bowles)
100% of the Shropshire lambs met the supermarket buyers’ specifications for conformation and fat class.
16 lambs (73%) were classified in the top two grades for conformation, which can be influenced only by breeding
None of the lambs was too fat – indeed, 100% achieved the most desirable grades for fat cover.