The Development of the Shropshire Down 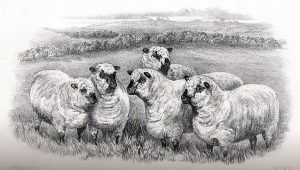 The exact origins of today’s Shropshire Down are unclear but generally agreed to be as a result of the improvement of the indigenous sheep of the Staffordshire and Shropshire border areas. These were hardy stock, not prone to footrot or scab, and produced wool of a superior quality. The fleece however only weighed about 2 – 2.5 lbs and the sheep were slow to mature to a suitable butcher’s weight. Following the achievements of stockbreeders such as Robert Bakewell with the rapidly maturing New Leicester and improvements of the Southdown by John Ellman, the sheep of The Long Mynd in Shropshire, Cannock Chase in Staffordshire and Morfe Common on the borders of Shropshire, Staffordshire and Worcestershire became subject to improvement during the first half of the 1800’s. 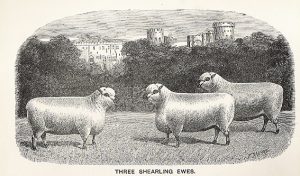 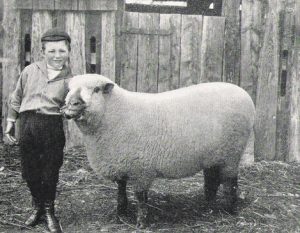 Records indicate that two Shropshire farmers, George Adney and Samuel Miere were instrumental in the long-term development and promotion of the breed.George Adney improved the local breeds from the Shropshire Hills by retaining those animals that combined their native hardiness with a good conformation without employing rams of other breeds to introduce desirable attributes. In contrast, Samuel Miere continued his father’s work on improving the native Shropshire sheep by introducing the influence of other breeds. As he described in 1858, at a farmers’ club meeting in Shropshire, ‘It is not attempted to be denied that the Shropshire is a cross-bred sheep. The original breed was horned, and the first attempt at improvement was to get rid if these encumbrances, and there is little doubt that this was effected by a cross of the Southdown. This sheep was well adapted for the Downs, but for the enclosures of Shropshire something more docile was required, consequently recourse was had to the Leicester’. And so it was that careful selection of stock resulted in uniformity and the establishment of a superior improved Shropshire Down, which was to make an impact at agricultural shows throughout the country. 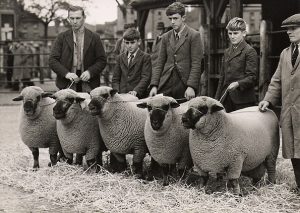 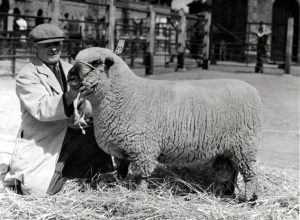 Founded in 1838 the Royal Agricultural Society of England organised annual shows throughout the country and generally in county towns. In 1845 the Society organised its annual show at Shrewsbury and although there was no suitable showing class for the Shropshire several local rams were displayed to interested visitors. By the time of the 1853 Royal Show at Gloucester the schedule included ‘Shropshires, or other grey or black-faced shortwools.’ The provision of this class to cater for the increasingly uniform and popular Midland breed was an achievement for breeders such as Thomas Horton, William Foster, and the pioneering Samuel Miere – all of whom exhibited and returned to Shropshire with awards. In the words of the judge at Gloucester, ‘the new breed of Shropshire Downs was very successful; it is to be hoped that the Society will recognise them as a distinct breed’. Four years later at the Salisbury Royal Show, George Adney and Samuel Miere shared two first prizes and one second in an additional class for ‘Shortwools, other than Southdowns’. Having impressed the officials the Royal Agricultural Society introduced special prizes and from the Canterbury meeting of 1860 the Shropshire Downs were given their own class. Following the Leicester show of 1868, newspaper reports spoke of Shropshires as ‘perhaps more widely spread than any other class of sheep’, and maintained that ‘in utility and adaptability to a considerable variety of soils we question whether they have their equal’.

The breed continued to be well represented at the Royal Agricultural Shows and in 1884 at Shrewsbury, 875 Shropshires were exhibited against 420 Southdowns, Hampshires, Lincolns, Leicesters, Cotswold, Mountain, and all other distinct breeds. Sixty exhibitors from fifteen counties provided this tremendous display of the county’s breed demonstrating the adaptability of the Shropshire Down, the most northerly of the Down breeds.

As the demand for the improved Shropshire grew so did the importance in maintaining its new reputation as a distinct breed. Uniformity and consistency of breed had been achieved and records of pure breeding were seen to be beneficial. Since the 1853 show at Gloucester attempts had been made to record the pedigree of Shropshire rams. With an accurate background to each animal, breeders would be able to ask a higher letting fee for a quality ram, whilst the flockmaster wishing to improve his stock would be able to have more confidence in his selection of sire. And so it was that the earliest records held by the Shropshire Sheep Breeders’ Association and Flock Book Society (SSBA) document a meeting held on 19 Dec 1882 and the appointment of an editing committee consisting of Mr J Bowen-Jones, Mr. H J Sheldon, Mr. E M Coleman, Mr. T S Minton, Mr. A Tanner, Mr. J Beach, Mr. J Evans and Mr. T J Mansell. The minutes of the meetings in 1883 record the steps for the compilation of a Flock Book with inclusion of the ‘winners of Prizes or Reserve Numbers at the Royal Agricultural Shows……. . To ascertain the names and breeding of such animals from the owners or their representatives and enter the same on the entry form of this association for the approval of the Committee at their next meeting.’ ‘The Flock Book will commence with the Registration of the above sheep separated into the respective years of exhibition and in the order of their merit.’ Entries for the 1st Volume closed on the 25 March 1883 and by the 30 March the entries of 23 breeders had been referred to an inspection committee for confirmation of bloodline.

As previously mentioned a system of pedigree recording and the production of a Flock Book enabled purchasers not only at home, but abroad, to identify reputable breeders. Oversees sales increased and between 1880 and 1900, 253 registered rams were exported. During the next 20 years no fewer than 6700 Shropshire rams left Britain to all continents but mainly to Australia, New Zealand and America. The impact of the Shropshire ram on fat lamb production in these countries is well documented. For example in the early 1900s 70% of lambs exported from Australia were one half or three quarters bred Shropshires. And in America, reflecting the Australian success of Shropshire rams crossed with Merino ewes, a Wyoming farmer commented: ‘The first cross Shropshire on Merino makes a very desirable all-round sheep for this country. They seem to stand such extremes of temperature as we have here at least as well as any other breed….’.
Such was the export trade that British farmers had come to rely upon these countries for supplementation of imported pedigree stock.

The fortunes of the Shropshire Down, affected by the outbreak of war, disease and the changing requirements of the domestic market changed dramatically during the early 1900’s. The First World War created significant disruption of world shipping and trade. A Foot and Mouth outbreak in January 1922 became an epidemic with sporadic outbreaks continuing into the 1930’s. This resulted in restricted exports and significantly an embargo on now important pedigree imports. Additionally the Shropshire developed for the American market was very woolly headed and not in demand by the British farmer, and the large joints from these sheep were not in demand by the butcher during these economically challenged times. Subsequently the registration of rams for use at home declined.

Recognising the decline in popularity of the Shropshire Down, the members of the Flock Book Society addressed the requirements of the home market and clarified the breed description by agreeing that sheep with ‘naturally clean soft black faces and legs’ were preferable to the heavily woolled strain. A Breed Publicity committee was also formed. In 1943 a flock competition was introduced and six years later a press agent was appointed, with a fund of £165 per annum, to finance show prizes and breed advertisements. However in spite of this promotional work the popularity of the Shropshire continued to wain so that by 1973 this once highly regarded and successful breed was to be found in only seven British registered flocks containing 402 breeding ewes. Such was the desperate state of the breed that a meeting was held in Shrewsbury in May 1974 to consider the future of the Flock Book Society. With the encouragement of a new Secretary, Mr Clive Roads, additional finance from an increase in membership fee, and the support of the Rare Breeds Survival Trust, the late 1970s saw a change in the fortune of the breed. The increase in numbers was gradual taking seventeen years, from 1973 to 1980, to almost double the number of breeding ewes to 780 in thirty two flocks. By 1992 there were 1844 breeding ewes in 78 flocks.

Due to continuing promotional work by the SSBA the Shropshire Down is enjoying a resurgence in popularity and is once again being recognised for the commercial attributes proven over many decades in many countries. The Shropshire is primarily used for crossing to produce high quality lambs that match the exacting standards of today’s meat buyers. Ram lamb trials conducted independently at Liscombe and Walford Agricultural Colleges in the 1990s have demonstrated good food conversion, growth rate and back fat scanning, achieving second place when compared with commercial Down and Continental breeds in the same trial. Eye muscle depth was similar across the breeds. Additionally in an analysis of results of the 1994 trial at Walford College of Agriculture, of Shropshire rams on North Country Mules lambing in March, no less than 95% of the resultant carcasses were in the Meat and Livestock Commission fat classification 2 and 3L, compared with the MLC all-lamb average of 67%. Facts demonstrated with frequent successes in lamb carcass competitions.

Another quality of the purebred Shropshire is utilised by Christmas tree growers who, with careful management, value the breed’s ability to graze in conifer plantations without damaging trees. Avoiding the use of chemical weed-killers satisfies the demands of today’s environmentally aware market for which a steady European export trade is being developed.

Today’s breed society continues to promote the Shropshire Down which can be seen exhibited at many major agricultural shows and displayed at the National Sheep Association main sheep promotional events. Come along and see this distinguished breed which has proven itself so many times in the past and continues to do so for today’s market. The Shropshire Down, truly a modern sheep ‘from the past – for the future’.